Also known as: Choc-a-Bloc Charlie Plus

A very small entry for now unfortunately, and a well overdue entry too!

Back in 2000, GTW64 was in regular conversation with the late Martin Holland – who mentioned working on a game at MC Lothlorien called Choc-a-Bloc Charlie … an update of the original 1984 release they had.  Martin described creating a loading screen for the game – though we cannot recall if he did any of the in game graphics.

It is not known who coded the game, though we are suggesting the original game’s developer or Paul Gill as a starting point.

Now, sadly we have actually seen the loading screen after Martin sent a video of his graphics work that he found on his C64 disks.  The video got recorded over accidently, though Martin was to send some disks anyway with the work for us to preserve.  He died shortly before this could happen, and his disks were thrown away.

The only memory we now have is of a loading screen which was similar to Panic Dizzy, with crates in the background and a main character at the front.  So similar to this: 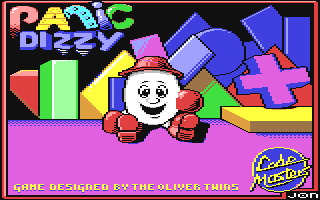 So the hope now is that we can find the coder of the game and hence find some of Martin’s work, as well as a game!

The game itself we know little about, and how much of an update it would have been.  We asked a few people like Neil Thompson and John Buckley if they knew anything about it – and neither of them could recall it.  So the search goes on!